Ethics in International Arbitration: an opinion of arbitral institutions 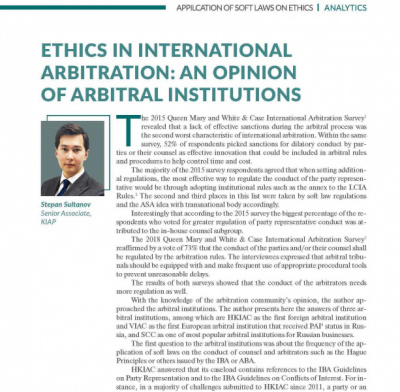 The 2015 Queen Mary and White & Case International Arbitration Survey1 revealed that a lack of effective sanctions during the arbitral process was the second worst characteristic of international arbitration. Within the same survey, 52% of respondents picked sanctions for dilatory conduct by parties or their counsel as effective innovation that could be included in arbitral rules and procedures to help control time and cost.

The majority of the 2015 survey respondents agreed that when setting additional regulations, the most effective way to regulate the conduct of the party representative would be through adopting institutional rules such as the annex to the LCIA Rules2. The second and third places in this list were taken by soft law regulations and the ASA idea with transnational body accordingly.

Interestingly that according to the 2015 survey the biggest percentage of the respondents who voted for greater regulation of party representative conduct was attributed to the in-house counsel subgroup.

The 2018 Queen Mary and White & Case International Arbitration Survey3 reaffirmed by a vote of 73% that the conduct of the parties and/or their counsel shall be regulated by the arbitration rules. The interviewees expressed that arbitral tribunals should be equipped with and make frequent use of appropriate procedural tools to prevent unreasonable delays.

The results of both surveys showed that the conduct of the arbitrators needs more regulation as well.

The first question to the arbitral institutions was about the frequency of the application of soft laws on the conduct of counsel and arbitrators such as the Hague Principles or others issued by the IBA or ABA.

VIAC in its turn answered that parties and arbitrators rarely explicitly agree on relevant guidelines or rules in VIAC cases but often take the IBA Guidelines on Conflicts of Interest as guidelines.

SCC clarified that the listed soft laws might play a role as a source of inspiration, but in reality they are seldom the subject of any discussion, let alone agreement of the parties. SCC has no cases when the parties would note any guidelines on ethics in the arbitration clause. Nonetheless, the parties and arbitrators of the SCC international cases use the IBA Guidelines on Conflicts of Interest frequently.

SCC recollects only one case where one of the parties raised issues related to alleged conflict in party representation and the ethical problems it might raise, without though making a case based on the IBA Guidelines.

The second query to the arbitral institutions was about the type of sanctions which arbitrators apply most frequently for the ethics violations by the party representative.

VIAC and HKIAC answered that the most common sanction is the allocation of legal costs to the detriment of the party behaving unethically.

SCC clarified that in an SCC proceeding, any measure adopted by the tribunal against the party should be based on the SCC rules. As for rules concerning the party representative conduct SCC Rules contain two articles: Articles 2 and 35.

Article 2 is typically referred to when the tribunal/Secretariat schedules the proceedings or considers extensions. Article 35 applies where a party fails to comply with the rules or tribunal’s orders. According to the SCC position, such failures do not, per se, mean a violation of the rules of ethics. SCC concludes that it does not recollect a case where the tribunal labelled a party’s behaviour as unethical and applied sanctions for that based on the above articles (or any other provisions of the SCC Rules).

The most intriguing question was about the availability of cases when as a result of an ethics violation by counsel, the arbitrator(s) asked the party to change the party’s representative.

VIAC has at least one such case in its caseload. HKIAC and SCC do not have any such cases.

To finish up with sanctions, our survey clarified whether arbitral institutions have cases when as a result of an ethics violation by counsel the arbitrator(s) applied sanctions other than costs’ allocation.

Not one of the interviewees has such cases. Of course, such sanction as appropriate inferences of the arbitrators cannot be tracked and reported in the statistics.

To compare the position of arbitration users and arbitral institutions, our survey asked for the arbitral institution’s opinion on the necessity of the ethical standards for counsel (1) as a mandatory part of the rules of the arbitration center (as the Annex to the LCIA Rules), (2) as mandatory rules stipulated in some global unified code (ASA’s idea in 2014-2015), (3) as soft law (IBA, ABA, etc.). The interviewees were also invited to provide their comments on the necessity of ethical standards for the arbitrators.

VIAC expressed the opinion that if the powers of the arbitral tribunal sufficed to deal with the parties’ misconduct there is no need for further sanctions. Therefore, VIAC is sure that soft law is the workable option. To make the rules binding on the parties, the arbitral tribunal may incorporate a code of conduct (or some rules) into the first procedural order.

Nonetheless, VIAC stated that the only comprehensive solution to tackle a party representative’s conduct would be the adoption of an enforceable ethical code of conduct binding on arbitration practitioners. VIAC emphasized that the most difficult question in finding a solution is who would monitor the violations and who would sanction the violators. For the time being, bar associations are vested with this role. Another approach might be to incorporate a code of conduct into the by-laws of the arbitral associations such as ASA, DIS and ArbAut and to ostracize members in case of unethical behavior.

SCC answered that the regulation of the arbitrators’ and the party representatives’ conduct falls mainly to the bars and professional organizations, for instance the IBA, rather than to arbitral tribunals or institutions.

HKIAC advised that the HKIAC Rules Revision Committee discussed the necessity of including some ethical standards for counsel in the 2018 HKIAC Administered Arbitration Rules and chose not to do so.

As to the ethical standards for arbitrators, 2018 HKIAC Administered Arbitration Rules contain arbitrator’s obligations with respect to his or her independence and impartiality and duty of disclosure.

The survey was sent also to ICC. ICC answered this question and all of the previous ones that they do not have any statistics or official opinion on the survey topic. ICC is not alone in this position. The survey solidified to the author that the arbitral institutions do not conduct any relevant statistics on ethics, the application of relevant guidelines or sanctions caused by ethics violations.

The author appreciates the contribution of HKIAC, VIAC and SCC to the survey. The Working Group will proceed with a survey of other arbitral institutions.