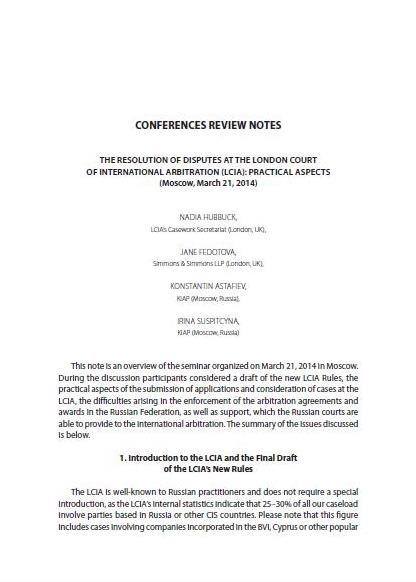 Источник: Russian Law Journal | PDF статьи
This article is an overview of the seminar organized on March 21, 2014 in Moscow by KIAP, Attorneys at Law, in cooperation with the LCIA. During the discussion participants considered a draft of the new LCIA Rules, the practical aspects of the submission of applications and consideration of cases at the LCIA, the difficulties arising in the enforcement of the arbitration agreements and awards in the Russian Federation, as well as support, which the Russian courts are able to provide to the international arbitration. The summary of the issues discussed is below.

The LCIA is well-known to Russian practitioners and does not require a special introduction, as the LCIA’s internal statistics indicate that 25-30 % of all our caseload involve parties based in Russia or other CIS countries. Please note that this figure includes cases involving companies incorporated in the BVI, Cyprus or other popular off-shore jurisdictions, and it is likely that a large percentage of such companies have either Russian or CIS-based beneficial owners.

We would like to present a brief update on the LCIA’s current caseload:


The LCIA’s advantages are as follows:


The discussion then moved to the recently published final draft of the LCIA’s new rules. The review of the current version of the LCIA Rules started in late 2009 and shall be finished this year. The most interesting amendments involve the express provisions on consolidation of cases, appointment of an emergency arbitrator and party representatives' code of ethics. In welcome news for Russian alphabet users, the alphabetical numbering of provisions has been replaced with the numerical system.

Under the current rules, proceedings can be consolidated by parties’ agreement and with a tribunal’s approval. Under the proposed consolidation provisions, the LCIA Court will be able to decide on consolidation before a tribunal is constituted; alternatively, once a tribunal is in place, another case can be joined in if certain conditions are satisfied.

An emergency arbitrator procedure has been provided in some detail, however, this provision is presented in the LCIA draft in parenthesis, and is still debated by the LCIA Court. If adopted, it would, in addition to the existing provisions for the expedited formation of the tribunal in the cases of “exceptional urgency”, allow for the appointment of an emergency arbitrator within 3 days of from receipt of an application, who may make an order or render a reasoned award as soon as possible (but no later than 20 days following the appointment).

Finally, the draft of the LCIA’s new rules include a remarkable innovation as they provide for a set of general ethical guidelines for parties’ legal representatives in the Draft Annex. The parties will have to ensure that their legal representatives have agreed not to engage in activities intended unfairly to obstruct the arbitration or to jeopardise the finality of the award such as knowingly make any false statement to a tribunal, prepare or rely on false evidence or conceal documents or initiate an undisclosed unilateral contact with an arbitrator. The tribunal is expressly empowered to make a finding as to whether there has been any violation of the ethical guidelines, in which case the tribunal may order sanctions against that representative including written reprimands, cautions and references to the legal representatives’ regulatory or professional bodies.

There is a number of other changes in the draft LCIA’s new rules, which intend to refine and update the existing procedure, such as provisions taking into account changes in the use of technology for the submission of Requests for Arbitration and Responses by email, and rules on the effecting delivery by electronic means Overall, the final draft of the LCIA’s rules indicates that the LCIA envisages arbitration under its auspices as being a more structured approach and also confirms our reputation as a trailblazer with some proposed innovations.

One of the advantages of the English arbitration law is its flexibility. The Arbitration Act 1996 contains 25 mandatory provisions which parties are not allowed to change by agreement. Otherwise, parties are free to agree how their dispute should be resolved, subject only to such safeguards as are necessary in the public interest.
Another main advantage of the English arbitration law is the ability of a party, in case of urgency, to apply to the court for interim measures before the arbitral tribunal is formed . Otherwise, party may only apply for such measures to the court with the permission of the tribunal or the agreement in writing of the other parties.

If the arbitration is administered under the LCIA Rules and parties failed to choose a seat, Article 16.2 of the LCIA rules provides that in this case the seat of arbitration shall be London, unless and until the arbitral tribunal determines in view of all the circumstances, and after having given the parties a reasonable opportunity to make written comments, that another arbitral seat is more appropriate.

Taking into consideration all the advantages of the LCIA rules and English Arbitration Act 1996 practitioners likely would prefer to conclude the arbitration agreement and not to deal with Russian state courts. At first site everything is simple: in case one of the parties files a claim to the court in breach of the arbitration clause the court shall operate “principle of non-interference” and send the parties to arbitration. However, this not always works. For example, in the well-known case Russian Telephone Company vs. Sony Ericsson the Supreme Commercial Court of the Russian Federation found invalid the asymmetric arbitration clause which granted only to one party the right to approach a state court for resolution of a dispute.

Although having an arbitration agreement chance to deal with state judicial system is not so high, Russian courts should not be abandoned completely. The reason is that they can grant interim measures in support of foreign arbitration, which was proven by case law. Certainly interim measures could be granted directly by arbitral tribunal, and we all know how difficult in fact to obtain measures from the state court. But enforceability of tribunal-ordered interim measures in Russia is a very controversial issue. Actually not only in Russia. The New York Convention 1958 on the Recognition and Enforcement of Foreign Arbitral Awards does not contain a definition of arbitral award; it only says that to be quality to an award, an arbitral decision shall be final. Conflicting case law exists on the issue whether or not interim measures decisions satisfy the requirement of finality and are covered by the Convention. According to common approach decisions on interim measures are not final and not enforceable because by themselves they do not resolve any part of the dispute and are temporary by legal nature. On the other hand, there is approach offered by US courts and started to be embraced by some civil law countries according to which decision on interim measures is final since it resolves the separate dispute between the parties about a request for interim measures. In AB Living Design v. Sokos Hotels Saint Petersburg the Supreme Commercial Court of the Russian Federation supported the first approach and held that interim arbitral awards of any kind, including awards made on provisional measures, are not subject to enforcement in Russia. So far with regard to assets in Russia it would be more effective to ask for interim measures not arbitral tribunals but Russian state courts.

It is well to bear in mind that this situation could sometimes be avoided. Not all interim decisions have to be recognized and enforced in Russia. Shining example is a series of cases IBRC vs. Quinn’ family in which Mareva freezing injunctions and Norwich Pharmacal orders were recognized through personal law of the legal entity without special enforcement procedure.

Finally, let us turn to enforcement of arbitral awards. Generally according to Supreme Commercial Court’s statistics there is no special problem with that in Russia, about 80 % of arbitral awards are enforced successfully. However, some issues regarding public policy and arbitrability do exist. Since the Informational letter of Presidium of the Supreme Commercial Court dated February 26, 2013 No. 156 was issued, there is no doubt that public policy is an extraordinary ground for refusal in recognition and enforcement of arbitral award. But it applies in practice. In Rosgazification case court refused to enforce the award “competing” with Russian state court judgment (award was based on the agreement which was held void by the court at the suit of company’s shareholders). This case is an example how corporate issues could be used to object jurisdiction of the international arbitration. With regard to arbitrability were several recent cases proved that Russian state courts are not ready yet to share with arbitration the disputes involving any public aspects, like disputes from the state contracts or forest rent.

At the moment these are one of the most problematic issues regarding arbitration in Russia. Taking into consideration the unification of the Supreme Court practitioners could expect in the future rather significant changes in court practice, including in the area of international arbitration.

Information about the author: